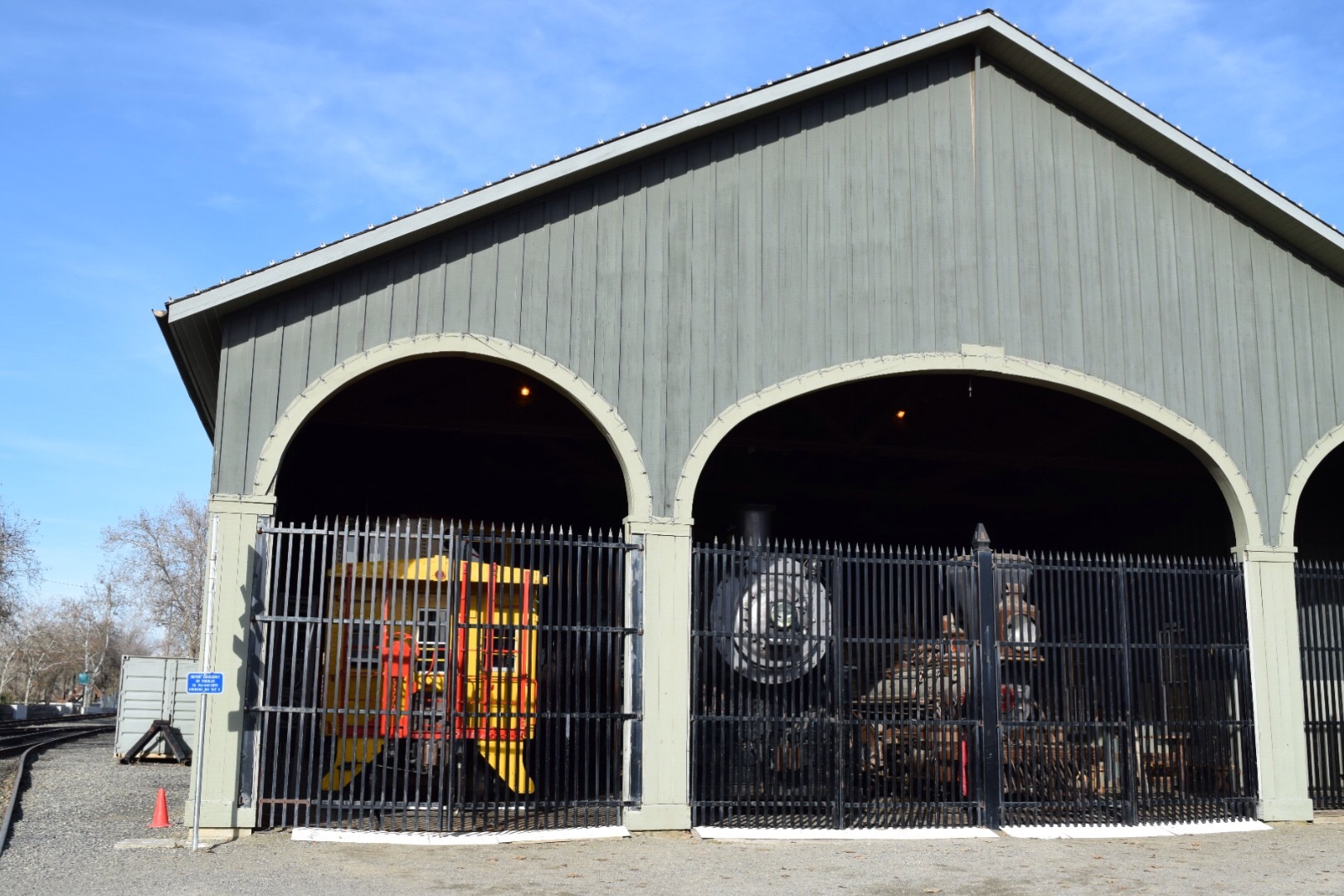 The Central Pacific Railroad Passenger Station is a faithful reconstruction of the western terminus of America’s first transcontinental railroad as it appeared around 1876. Visitors step back in time as they peer over the counter at Station Master Samuel Robinson’s ticket office, hear the dots and dashes emanating from the telegraph office, and look into George Smith’s crowded baggage room and separate waiting room intended for ladies and children only. Inside the train shed is an array of vintage railroad locomotives, cars and other equipment. 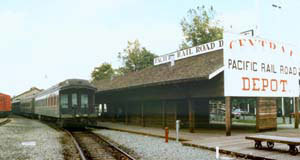 Interpretation at the reconstructed Depot focuses on the story of freight transportation and its impact on Sacramento and the West during America’s centennial year. The Depot platform contains displays of all types of perishables, manufactured goods, agricultural implements, hardware and dry goods in crates, barrels and sacks.

Posted displays detail the history of the Depot structure, its importance to Sacramento and the story of railroad freight in the Sacramento Valley during the third quarter of the nineteenth century. Just to the south of the Depot, at the approximate point where the railroad tracks cross the Delta King Hotel landing, groundbreaking for the Central Pacific Railroad took place in early 1863.

The Central Pacific Railroad Freight Depot was reconstructed in 1986. 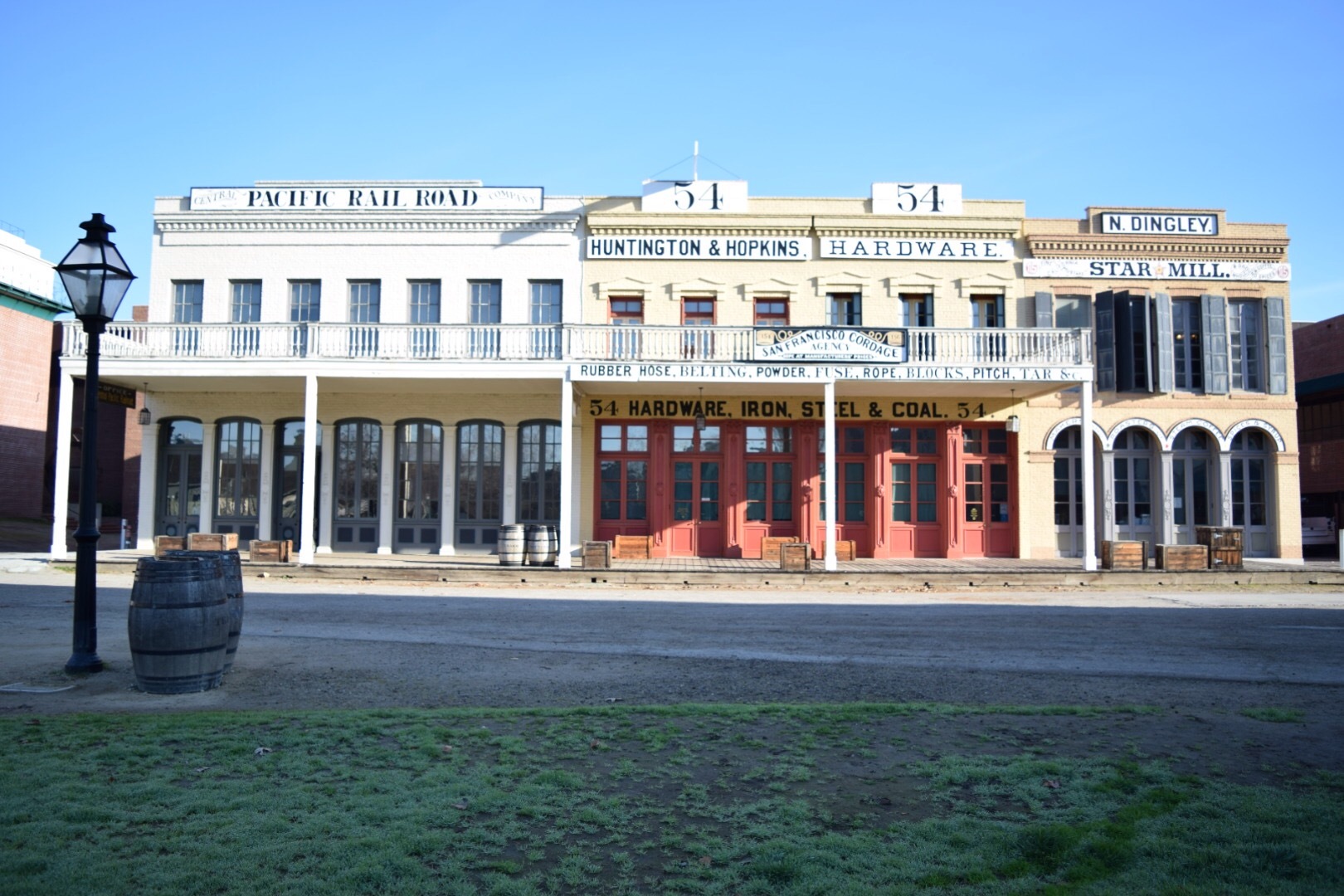 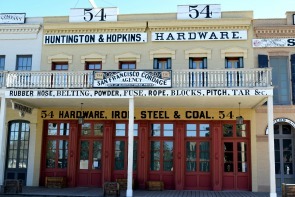 One of the most charming spots in Old Sacramento is the Huntington, Hopkins & Company Hardware exhibit, located at street level in the Big Four Building, adjacent to the California State Railroad Museum. Developed as an exhibit in 1981, the Hardware Store recreates a small town hardware business of the 19th century. By the 1860s, Huntington, Hopkins & Company Hardware was a sprawling, wholesale brokerage supplying Northern California with all kinds of goods from the East.

The first thing you notice upon entering the Huntington, Hopkins & Company Hardware Store are the Dietz lanterns hanging from ceiling rafters, and the crates and baskets piled on the floor. The west wall holds displays of 19th-century tools and hardware. A devoted group of docents gladly explains the store’s history, and the use of historic tools. The store’s “back room” contains exhibits of 19th-century tools and machinery. 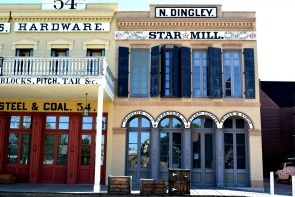 Little documentation is known to exist regarding the Nathaniel Dingley Steam Coffee & Spice Mill. Old Sacramento histories and official reports make conflicting claims about the building’s origins. It is known that Nathaniel Dingley arrived in San Francisco in February 1850, settling within a matter of months in Sacramento and buying out a partner in the coffee and spice business.

The building that now stands is believed to be roughly across the street from Dingley’s original location, and was built within the two years following Sacramento’s disastrous 1852 fire. There were no surviving early pictures of the Dingley Spice Mill building on which to base an accurate, 19th-century restoration. 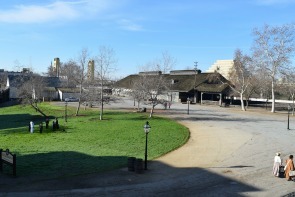 The portion of the Old Sacramento State Historic Park bounded by Front Street on the west, I Street on the north, J Street on the south, and the alley between I and J Streets on the east, commonly known as the “1849 Scene,” is one of Sacramento’s most historic spaces. Sacramento City (the name by which the city was incorporated March 18, 1850) was part of the New Helvetia land grant, occupied by Captain John Augustus Sutter, Sr. in August, 1839. By the summer of 1848, Captain Sutter was in poor financial condition. Sutter’s advisers devised a plan to pacify his creditors.

In October 1848, he transferred title of his Sacramento property to his son, John Augustus Sutter, Jr. The younger Sutter recognized the need for an established business community along the waterfront to serve the growing influx of miners. In December, 1848, he had a town site surveyed and began selling city lots in Sacramento City.

On December 28, Sutter Sr. granted the partnership of Samuel J. Hensley, Pierson Barton Reading, Jacob R. Snyder and John Augustus Sutter, Jr. (Hensley, Reading & Company) Lots 1, 2, 3, and 8 in the block bounded by Front and Second, I and J Streets, plus property at the Front for $6,500. Two days later he granted Reading alone, Lot 4 in that block, plus two other city lots for $1,000.

To date the following structures have been reconstructed on their original locations: the Eagle Theatre, the Tehama Block Building, and the C. M. & T. Connecticut Mining & Trading Company building. 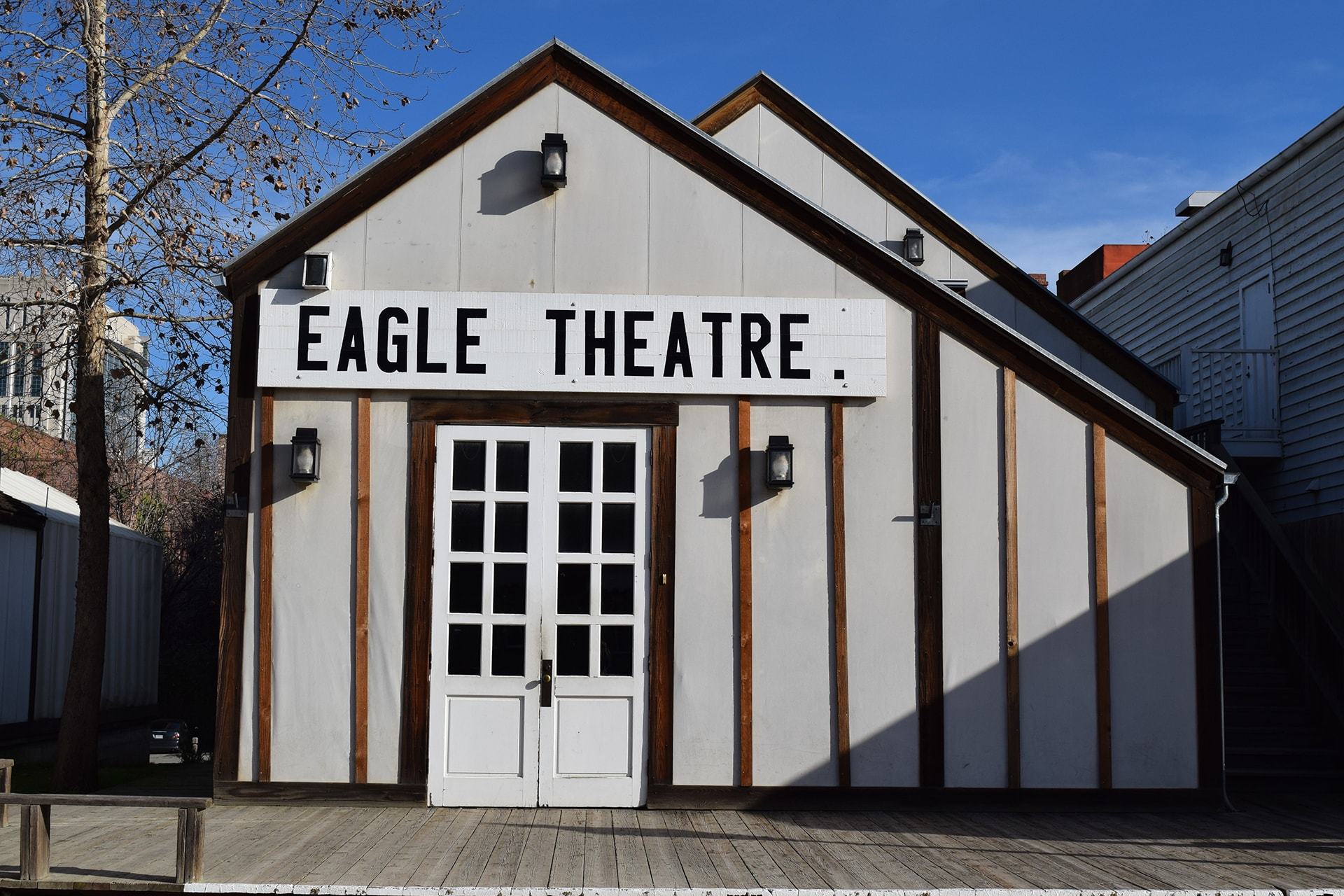 The Eagle Theatre is a reconstruction of the first building erected in California as a theater. The original playhouse, built of wood frame and canvas with a tin roof, provided Gold Rush Sacramentans with entertainment for a mere three months before being inundated in the flood of January 4, 1850. Today, the Theatre offers docent-led programs on the history of Old Sacramento to grades 4 - 6 school groups on a reservation basis. 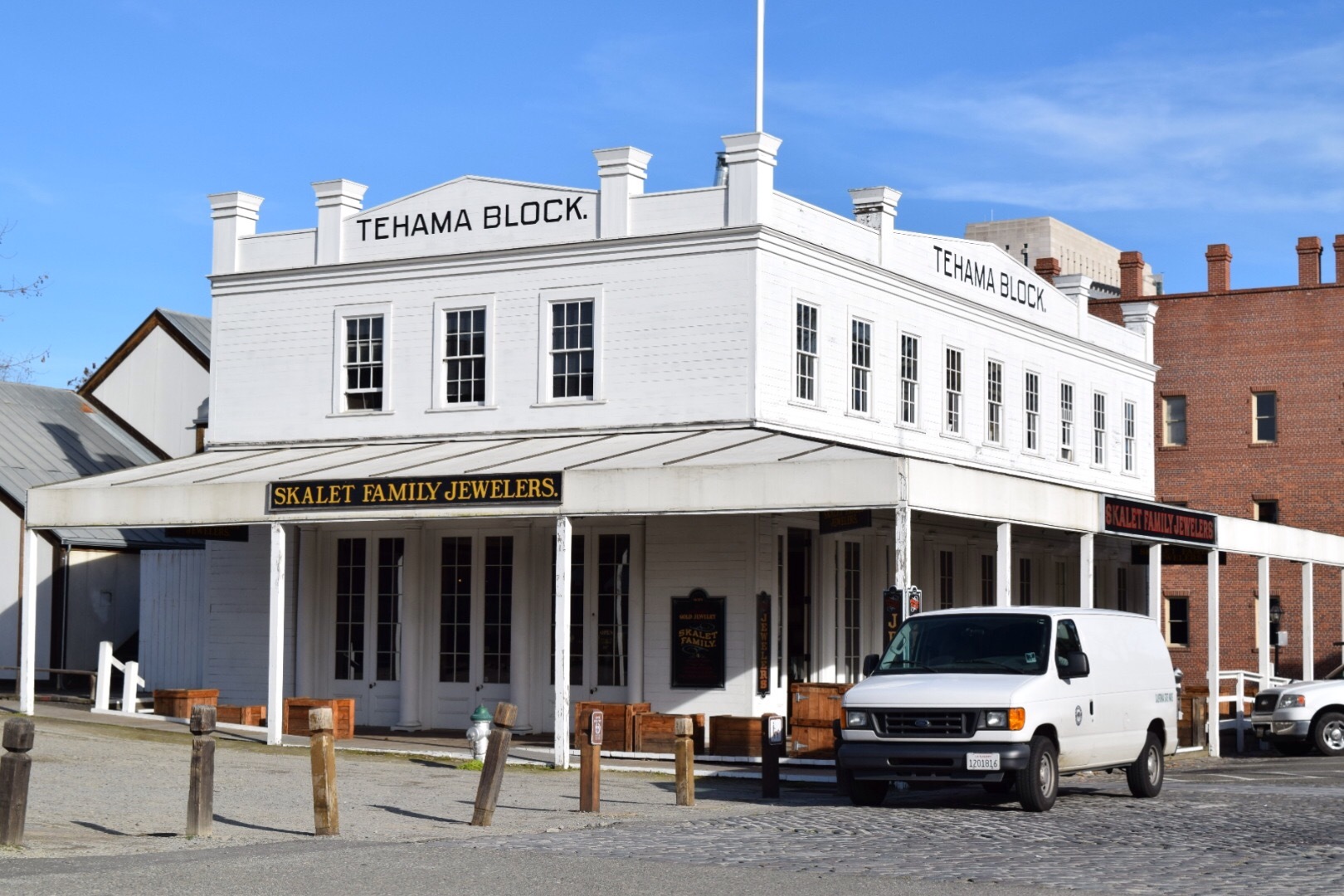 The site of the Tehama Block on the northeast corner of Front and J Streets in Old Sacramento is a historic one. Pierson Barton Reading purchased this choice lot from his friend John Augustus Sutter, Jr. on December 30, 1848. At the time, any address along Front Street between I and M Streets was considered prime real estate, due to its close proximity to commercial activity along the riverfront docks.

Several different structures occupied the site between 1849 and 1852. The earliest were single story structures, most likely made of canvas stretched over a wood frame, as were many of Sacramento City’s first buildings. The 1980s edifice replicates one under construction in January of 1850.

Known as the Tehama Block, the structure was a wood-sided, 34x63 foot two-story building designed in the Greek Revival style. Woodcut views, published in the Steamer Edition of The Sacramento Union for March 29, 1851 and in The Daily Union for March 31, 1851, show it completed in place, with sidewalks covered by awnings.

The Tehama Block was built by Major Samuel C. Bruce of Sacramento and Teschemacher & Company of San Francisco for $36,000. It rented for $3,600 per month. During its short lifetime (1850 -1851), numerous business ventures were squeezed into the building. These included stores that sold wholesale and retail provisions, groceries, clothing, stationery, newspapers, books, maps, and miners’ supplies, plus offices that housed auctioneers, land agents, steamboat agents and exchange brokers. The rapid succession of various enterprises was typical of the fast pace and competitive spirit of the era.

On the second floor of the Tehama Block, Joseph Grant operated the True Delta Depot. Grant was the sole California agent for the True Delta, a daily newspaper published in New Orleans and placed aboard the mail steamer bound for the Pacific. The Depot also carried periodicals and books from throughout the United States, merchandise always popular with West Coast residents hungry for news from home.

The Tehama Block was in existence for less than two years. Plans to tear down the wood structure and replace it with a brick one were underway during the summer of 1851. The building was completed and occupied by September of 1851 and became known as “Bruce’s Building” or “Bruce’s Block.”

The California Department of Parks and Recreation moved the Sacramento District State Parks administrative offices into second floor offices in the Tehama Block in the fall of 1990. An interpretive concession, Skalet Family Jewelers, occupies the first floor.

The reconstruction of the historic Tehama Block Building represents one phase of the planned development of Old Sacramento State Historic Park’s 1849 Scene. 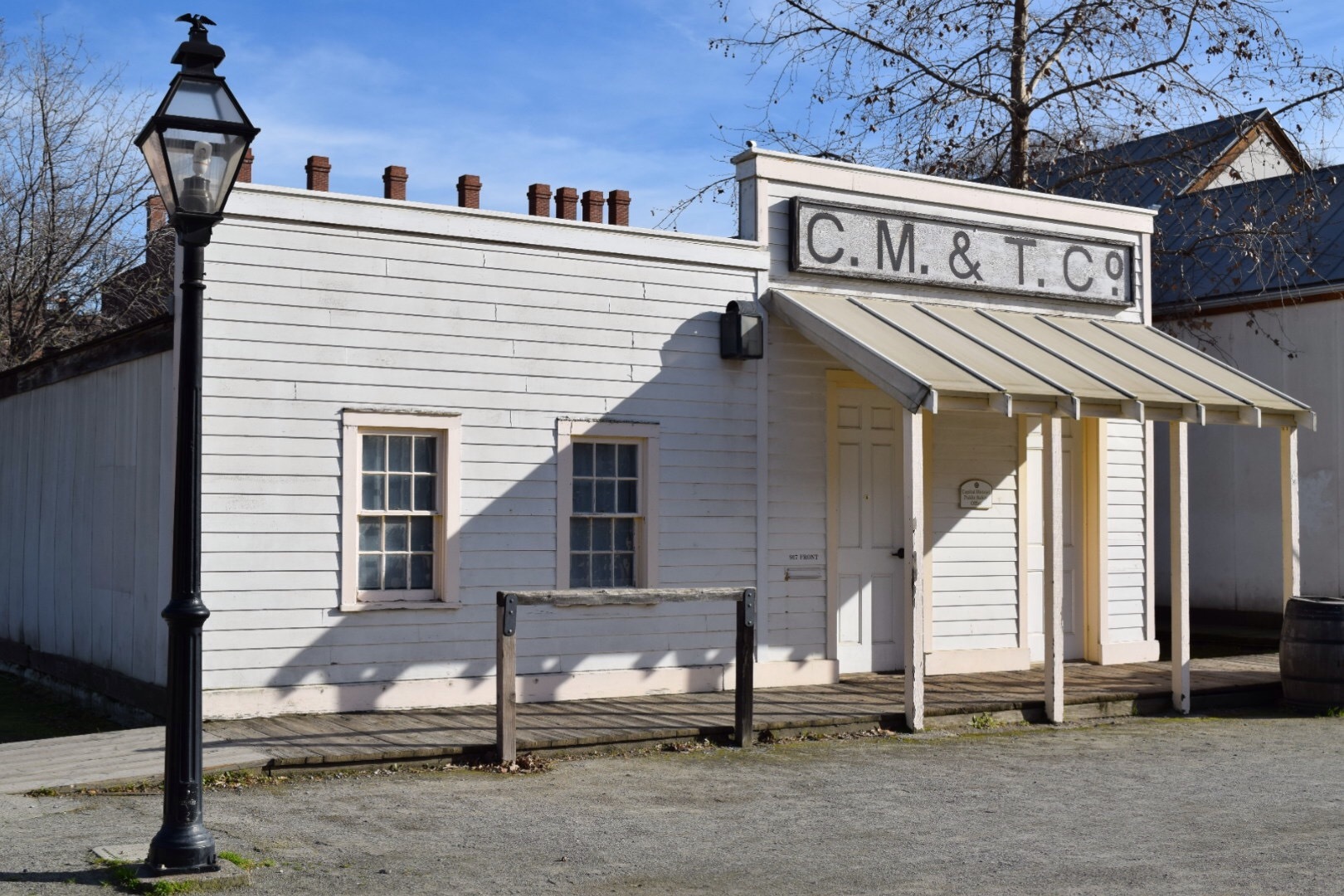 Located just to the north of the Eagle Theatre in Old Sacramento is a small reconstructed building with “C.M.&T. Co.” in bold letters on the front. This structure was originally occupied by several different general merchandise firms all associated with Thomas McDowell. At various times, these firms leased the space from McDowell and operated under an assortment of names, including the Connecticut Mining and Trading Company (C. M. & T. Company); Crowell, McDowell and Company; McDowell and Company; and Crowell, Dudley and McDowell.

The structure, composed of a wood frame and canvas, was designed to be built quickly and of immediately available materials. Research indicates that the structure was built for temporary use during the summer of 1849, and then was added onto and made more stable and substantial as winter approached. The Connecticut Mining and Trading Company, an auction and commission business, was its first occupant. Despite its temporary intent, the building stood until 1852.

The reconstruction of the historic Connecticut Mining and Trading Company building represents another phase of the planned development of the 1849 Scene. 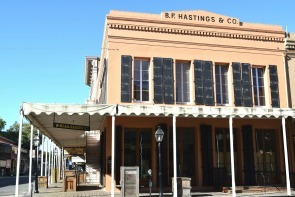 The B. F. Hastings Building is an original structure located on the corner of Second and J Streets in Old Sacramento. Benjamin Franklin Hastings was not the original owner of the property where his building now stands. It was part of the land grant made to John Sutter by Mexican governor Alvarado in 1841. John Augustus Sutter, Jr. sold the lot to William Petit in 1849; he in turn sold the property to Wesley Merritt, who built a grocery store.

The Merritt Building was lost in a fire which devastated most of the city on November 2, 1852. Almost immediately Merritt leased space in a structure under construction at the corner of Second and J Streets. Financial problems appear to have beset the businessman, however, and the property was sold at a sheriff’s sale to Benjamin F. Hastings on March 16, 1853, for $1,500.

Hastings completed and opened the building with his bank, Hastings & Company, on the corner on April 25, 1853. Other occupants of the street level offices in the early years included two clothing merchants (W. Meyer & Company, becoming I. & S. Wormser in 1854, at 28 J Street and L. Herzog & Company, at 38 Second Street). Wells, Fargo & Company were tenants at 40 Second Street from early 1854 until November of 1857.

Space on the second floor was leased to Theodore Dehone Judah (1826-1863), the engineer for the Sacramento Valley and transcontinental railroads, from the spring of 1854 to February of 1855. Both the Alta Telegraph Company and its successor, the California State Telegraph Company, were occupants. The building was also the western terminus of the famed Pony Express.

When Sacramento became California’s capital in 1854, the state’s Supreme Court took space in the Hastings Building (beginning in February 1855). In 1857 the Court moved to the Jansen Building at Fourth and J Streets, but returned to its original location in the Hastings Building in December of 1859. It stayed there until 1869, when its new quarters were ready in the State Capitol.

Today, the first floor of the B. F. Hastings Building houses the Wells Fargo History Museum. The second floor (including the former Supreme Court chambers) is currently house district employees.